It’s in our name and it’s the theme of our blog. What do we mean when we say we are living life following “the Way?”

Well, to explain it, we need to start off by asking you a question:

Imagine yourself standing before the all powerful God of the Universe and answering that question.

What would you say?

There are a lot of different answers that people give to this question. Maybe, “I try to be a good person”; “I have never done anything really terrible”; or “I am very religious….”

And those might seem like good reasons, on the surface. But the more we understand who God is, the more flimsy those reasons become. First of all, God is utter holiness. Psalm 18:30 says that, “His way is perfect.” There is not even a shadow of imperfection in Him at all. God is also just. Psalm 96:13 says, “For He is coming, for He is coming to judge the earth. He shall judge the world with righteousness, and the peoples with His truth.”

The truth is, when we stand before that Holy and Just God, holding before Him our meager lives, we will realize that even with the bits of good we did, even though we maybe tried hard to be religious, we can never measure up to the standard that God is judging us by. Not one of us has lived in complete perfection and utter righteousness.

Romans 3:23 says that “all have sinned and fall short of the glory of God.” Every single one of us has at some point done something that broke God’s law. And James 2:10 says, “For whoever shall keep the whole law, and yet stumble in one point, he is guilty of all.” Every time we choose to sin, we are choosing our ways over God’s ways. We are in direct rebellion to Him.

Not only that, but Romans 6:23 says, “For the wages of sin is death…” Because of our sin, we deserve eternal death, separation from God in Hell!

Yet that’s not what God offers us. The full verse of Romans 6:23 says, “For the wages of sin is death, but the gift of God is eternal life through Jesus Christ our Lord.”

Jesus, God in the flesh, humbled Himself to come down from Heaven and onto this sin-ravaged Earth. Because of His immense, overwhelming love for us, He came to suffer and die in our place. Isaiah 53 says, “But He was wounded for our transgressions, He was bruised for our iniquities; The chastisement for our peace was upon Him, and by His stripes we are healed.” Though He never sinned, He took on Himself all of the wrath of God for every sin that ever has been or ever will be committed.

Even more amazing, the Bible says that He endured the Cross “for the joy that was set before Him” (Hebrews 12:2). He loves us each so much that He suffered for us with joy, and the Bible says, “while we were yet sinners, Christ died for us” (Romans 5:8). He didn’t wait for us to fix ourselves up because He knew we couldn’t, and He loved us too much to leave us in our sins. The Bible says that God is “not willing that any should perish but that all should come to repentance” (2 Peter 3:9). Jesus sacrificed Himself to become the Way for us – the way to come out from under the weight of our sin and into a hope-giving, life-defining relationship with God.

And the story doesn’t end with His death! On the third day, just as Jesus predicted, an angel announced, “He is not here, but is risen!” (Luke 24:6) Jesus defeated death and proved that He also defeated the sin that brought death into the world. We can now know if we put our trust in Him that, “God both raised up the Lord and will also raise us up by His power” (1 Corinthians 6:14). Through Him, in our repentance, we can be given a life lived “more abundantly,” as Jesus said in John 10:10, and eternal life with Him.

So how do we get that?

Accepting God’s gift is beautifully simple. The Bible says, “If you confess with your mouth the Lord Jesus and believe in your heart that God has raised Him from the dead, you will be saved” (Romans 10:9). We have to understand that we are sinners with no hope on our own but that Jesus paid for our sins when He died on the Cross, and believe that He rose victoriously that third day.

If you believe those things with all of your heart, confess them to God in prayer, and turn to repentance from rebellion, giving your life over to God, then you are saved. You have been “born again” (John 3:3), you are a “new creation” (2 Corinthians 5:17), and God calls you His child (Romans 8:15-16). The hole in your heart has been filled and you can learn to have a relationship with the God who loves you.

So what would be our answer if we were asked why we should be allowed into Heaven? We would say with Paul, “not by works of righteousness which we have done, but according to His mercy, He saved us” (Titus 5:3).

We are forgiven according to God’s mercy shown in Christ, who is the Way, the Truth, and the Life (John 14:6). 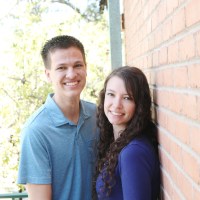 Welcome to Life Along the Way! We're Benjamin and Meredith Green, a couple of young marrieds in the dry deserts of Arizona trying to follow our Savior and His Word from one crazy adventure to the next.